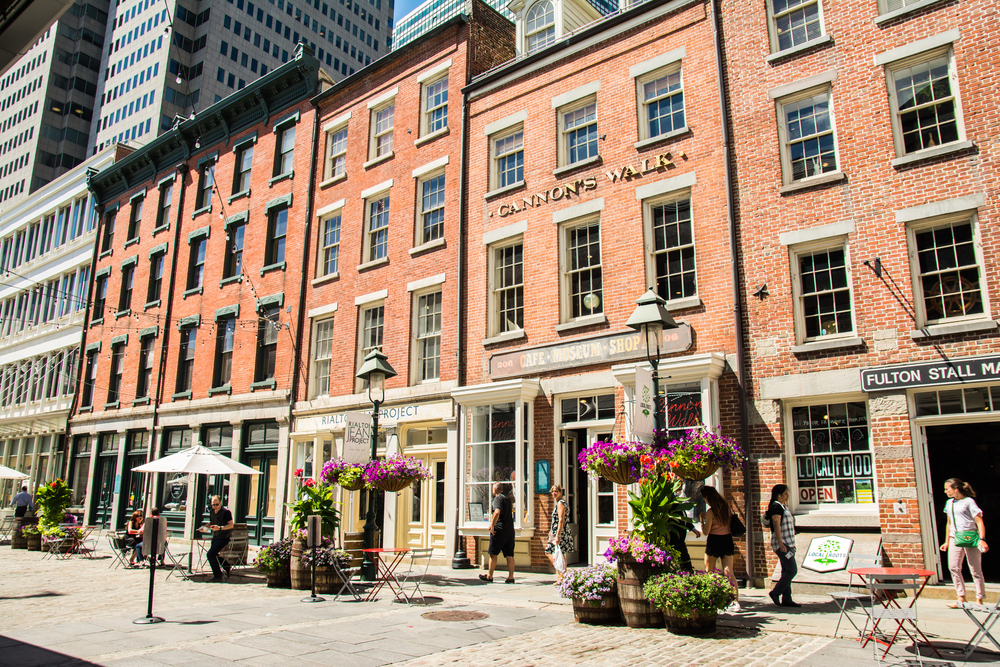 The South Street Seaport has seen its share of history since the site’s first pier opened in 1625. The seaport was occupied by the British during the American Revolutionary War and later put New York on the map as a world trade center. In more recent years it fell into a state of tacky, tourist stalls that locals avoided, but now the up-and-coming Seaport District is undergoing a renaissance of sorts.

This year the historic district has opened its doors to new shops, restaurants, and neighbors: ESPN just opened a NYC studio at the edge of the port this spring. The old, wooden pier and tired shopping plaza were torn down and replaced with Pier 17, a mostly transparent 300,00- square-foot mall with a lush, green rooftop.

Pier 17’s Rooftop Concert Series just kicked off in July with a full lineup set through October. Musical acts include Kings of Leon, Sting, and stand-up sets by NY-local Amy Schumer and Daily Show’s Trevor Noah. Pier 17 also has a cinema club in the works for movie screenings to be enjoyed on the rooftop.

[Discover the Best Views from these Amazing NYC rooftops]

Shops and restaurants are expected to open during the summer to fill out the district and draw both visitors and New Yorkers. The Amsterdam-based men’s fashion brand Scotch & Soda opened this spring at 18 Fulton Street. River Lounge has also recently opened its doors, offering a lounge-like outdoor atmosphere with views of the Brooklyn Bridge; perfect for whiling away a warm afternoon.

Summer pop-up Market Hall is open toward the north side of the pier with hand-crafted cocktails and grab-and-go food. For a full meal, Vintage 61 opened in the spring; the sports bistro with a wine focus is set up to please everyone. Its stunning interiors, drink list and fresh, updated pub favorites ensure that the spot will see success.

The South Street Seaport Museum is a neighborhood mainstay; visitors can learn about the area’s history in terms of its impact as an essential port in establishing trade in the US. Tickets can be purchased at the museum on Fulton Street; the print shop on Water Street and tours of boats docked at Pier 16 are also included in admission. Be advised, the museum still isn’t at full operation following damage caused by Hurricane Sandy.

To read more on incoming tenants, check out the Downtown Express article on expected 2018 openings for the Seaport District.