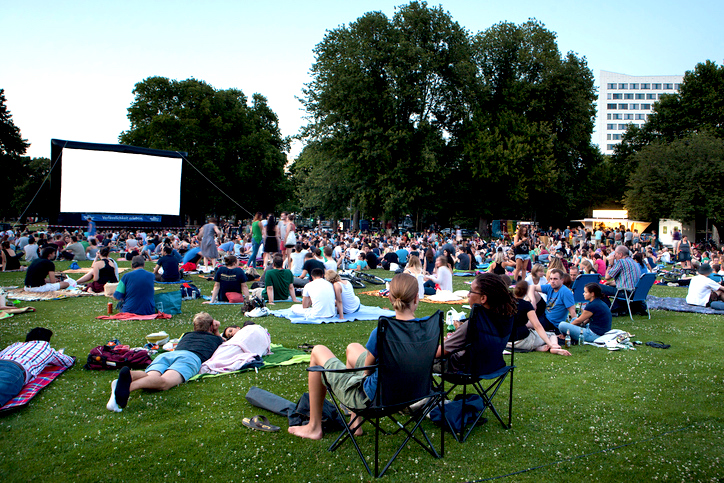 Need a night to relax? Wind down after dark with an outdoor summer movie screening at one of New York City’s famous parks, piers, museums, and rooftops!

Watch classic flicks in Bryant Park during the HBO Bryant Park Summer Film Festival, held from June 18th–August 20th. Showtime starts once the sun sets, following a brief Warner Brothers Cartoon screening. Bring your own snacks and blankets, or drop by the Fountain Terrace for food from Hester Street Fair vendors. Screenings will be announced the last week of May.

Bringing the kids during your stay? Drop by the Hudson River Park Pier 46 on Friday nights for a screening of family-friendly movies alongside the river, including The Secret Life of Pets, Fantastic Beasts and Where to Find Them, and more. And the best part? Popcorn is free! Screenings run from July 10th–August 18th.

Take a tour of the Intrepid Sea, Air & Space Museum and then head over to the flight deck for a free moving screening as the sun sets. Shows run from May to August, including Top Gun, Wonder Woman, Friday the 13th, Dunkirk, and Ghostbusters.

Kick off the week on a high note with a free movie at Waterside Plaza every Monday evening, starting August 14th. Partnering with a local cable station, the plaza screens both old and new films, and include The NeverEnding Story, How to Train Your Dragon, The Wizard of Oz, and Alice in Wonderland. Seating is provided, but we suggest bringing a lawn chair just in case.

On the third Saturday of each month beer brand Peroni and Italian marketplace Eataly join forces on the roof of pop-up restaurant BAITA for the Peroni Movie Series. Tickets go for for $35 a pop, and include free unlimited popcorn and fresh brews. Mark your calendars for Romeo and Juliet, Taxi Driver, Roman Holiday, and La Grande Bellezza.